I’M CRAZY FOR TRYING AND
CRAZY FOR CRYING

As I sit in my red, vinyl bean bag chair, headsets on, cord attached to the turntable….

1960’s
On our small farm in Eastern Washington, there was not a lot of exposure to the outside world of music. Our kitchen radio was tuned to a tinny sounding AM station. And then we had our Magnavox black and white television.  My Dad liked to watch Hee Haw, Bonanza and Gunsmoke on tv. I remember that during the opening credits of Bonanza, I would sit on my wooden rocking horse wearing a red cowboy hat. I was riding horses with Ben Cartwright and his sons. Giddy up! I also admired the ladies wearing skirts with white fringe that matched their white cowboy boots. I wanted one of those pretty outfits …. I still do. 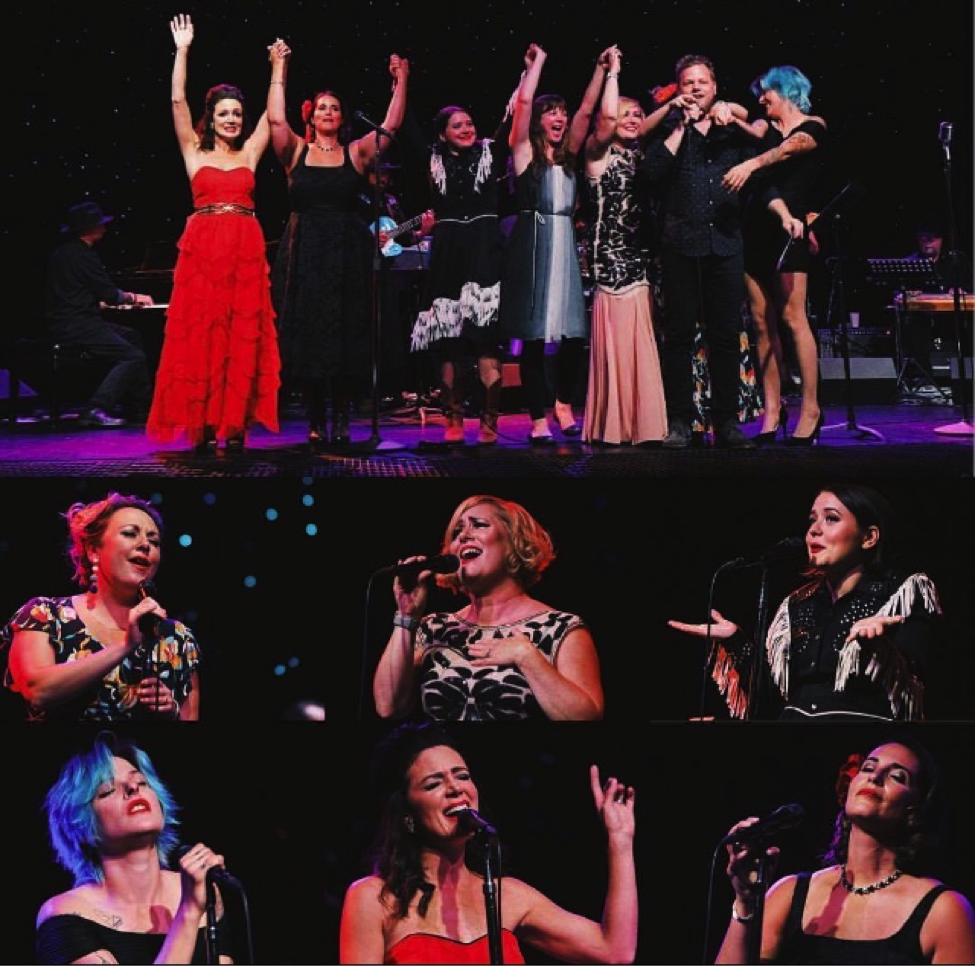 Nashville, TN 2017
For the past 3 years, my musician friend, ‘Nashville Recording Artist Jessica Lynne ‘has been performing at The Sweet Dreams Music of Patsy Cline Show. Previous years, I was out of town. But this year I was home and looked forward to seeing it. However, I was not familiar with Patsy’s life story.

Quite perfectly, I was on a Nashville layover before the show, and could experience the new Patsy Cline Museum. It’s above the Johnny Cash Museum. Her life was cut short at age 30. But Patsy still managed to be recognized as one of the most influential, successful and acclaimed vocalists of the 20th Century. Her music crossed over from country to contemporary. She began hitting the charts in 1957 with songs like “Walkin ’After Midnight”, “I Fall to Pieces” and “Sweet Dreams”. Her song “Crazy”, written by Willie Nelson, holds the record for being the most played song on jukeboxes. Her life ended March 5, 1963, in a tragic private plane crash.

Although her life ended, her music did not. Millions of records have sold since her death. In 1973, she became the first female solo artist inducted into the Country Music Hall of Fame. In 2002, she was voted Number One on CMT’s The Greatest Women of Country Music and ranked 46th in the “100 Greatest Singers of All Time “issue of Rolling Stone magazine.

The museum was easy to navigate, with interactive display windows filled with handwritten letters, record albums, clothing and even furniture from her dream home.  A dream home she was only able to live in for a few months. She grew up in poverty, but her music lifted her up and away from that life.  A life that ended just as it was beginning. Her voice and impact lives on, though. 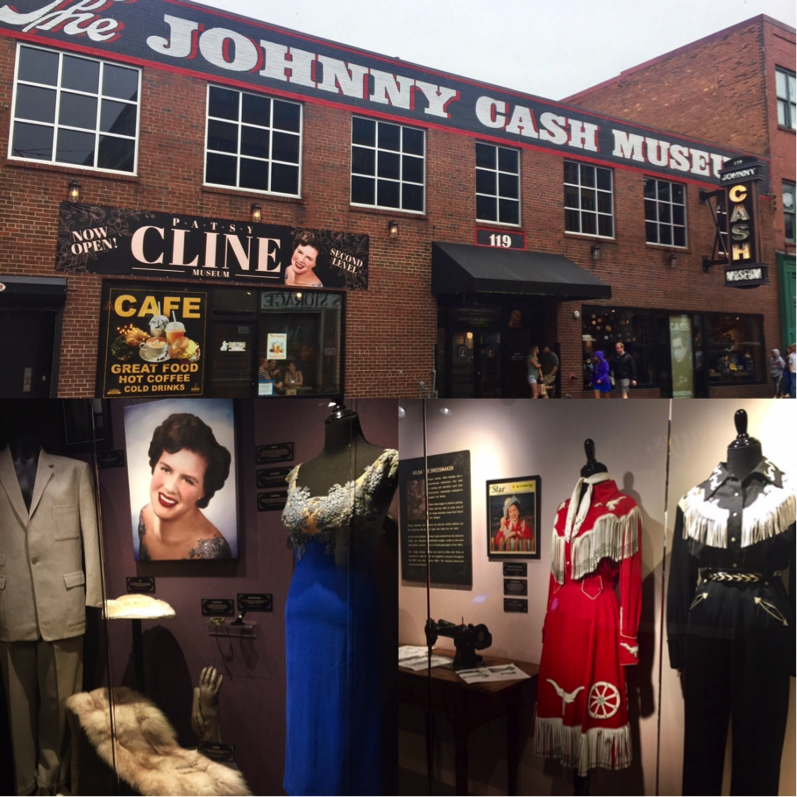 ​Sweet Dreams Music of Patsy Cline   September 8-9, 2017
The Triple Door Theater, Seattle WAOne of the great benefits of ROCKIN’ Through My Fifties, is that I have become friends with musicians.  When I know the performer onstage, it adds a personal connection to the music.  In addition to Jessica Lynne, I also knew two other artists at the Patsy Cline Tribute Show. Kate Voss and Jason Goessl. They perform together as Sundae and Mr. Goessl.  2017 was the 9th year of the tribute show. It takes place two nights, in honor of Patsy’s September 8th birthday. This was my first visit to The Triple Door. It originally opened in 1925 as The Embassy Theater. It reopened in 2003 as a renovated dinner and music venue, The Triple Door.  My evening began by enjoying a Happy Hour in the Musicquarium Lounge, with fellow flight attendant friend, Sherry. She had recently been in Nashville, too, so we both had our new cowboy boots on for the show! 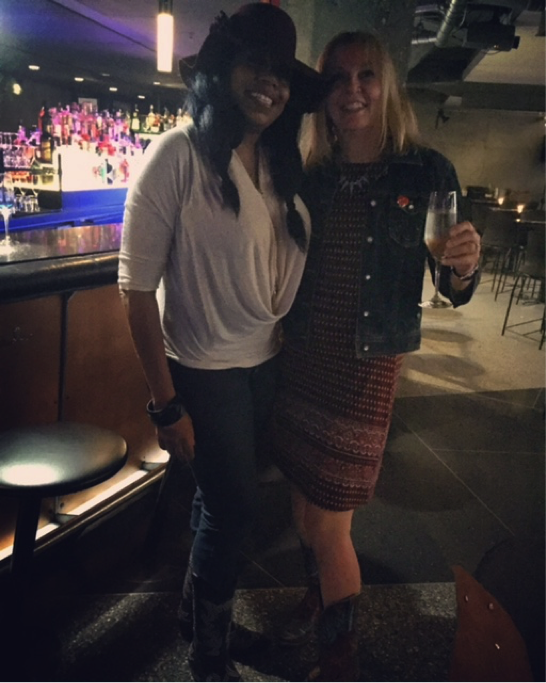 ​Soon, I saw friends Jessica Lynne and Susan Renville enter the venue. Susan owns her own event planning company, Renville Entertainment. They came over to our table, I made introductions and gave Jessica a special gift I had bought for her in Nashville. A little pin from the Patsy Cline Museum. I also bought one for Kate. They both wore them on their dresses during the performance, which made me smile.  Jessica asked us if we wanted to see the Green Room and the stage! Susan and I said YES, and dashed off, with Sherry holding our table.  It’s always fun to see the backstage action. And to get a close-up view of their gorgeous dresses. We even sneaked onstage. Wow! What a view. 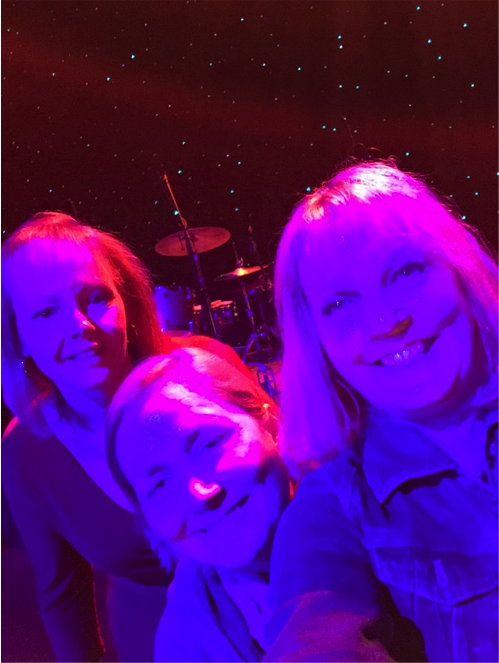 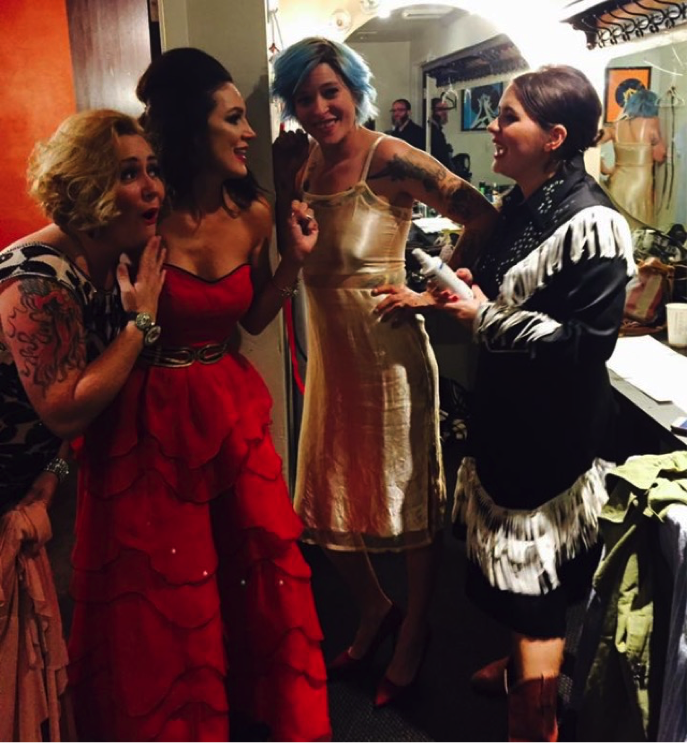 ​Not long after, Kate Voss and Jason Goessl entered the venue. Busy day for them, since they had been at an earlier performance. Musicians are some of the hardest working people I know. Kate came out later, and we admired what she was wearing. Absolutely the cutest dress and pair of shoes.

Showtime! We entered the theater, and sat down at our table. What a lovely and intimate venue. Celebrating what would have been Patsy’s 85 th birthday, were the following Northwest singer songwriters: V. Contreras, Star Anna, Mackenzie Mercer, Jennifer Hopper, Jessica Lynne and Kate Voss. They performed alongside the following musicians: Rebecca Young, William Stover, Aaron O’Neil, Jason Goessl, Country Dave Harmonson.  The MC was KEXP DJ Troy Nelson. 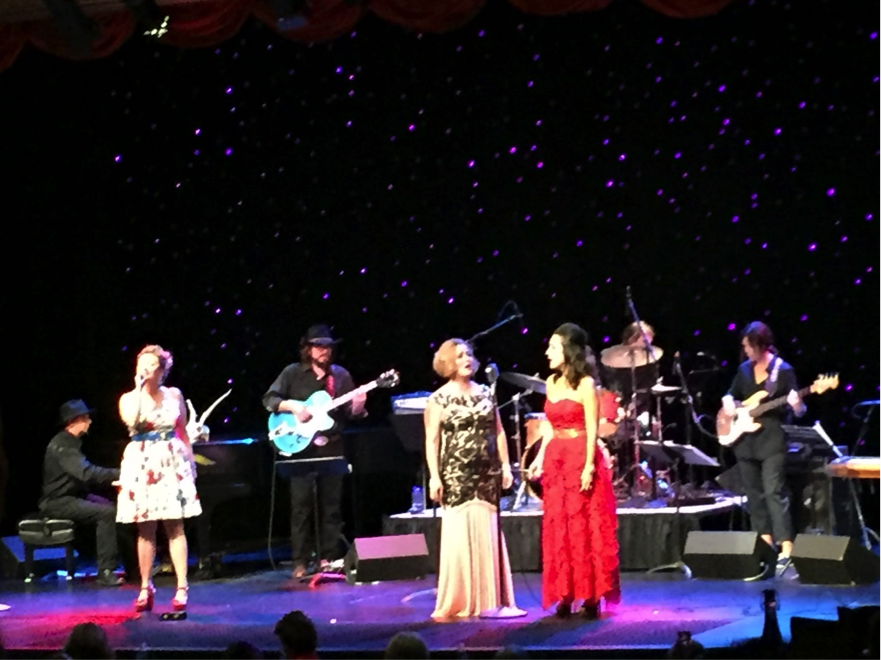 ​The minute they stepped onstage, we were swept away into the nostalgic past. It was hard not to sing along. I could see people swaying side to side, like a musical posse, out for sweet evening horse ride. I loved that they interchanged vocalists for each song. And, then there were the backup singers; The Recliners. Get it? Re-Cliners. That’s what made the evening so enjoyable, too. A lot of humor, intermixed with their beautiful voices. Each woman, brought her own unique voice to the stage. They all come from different pasts, different lifestyles, different music genres. But each had their own personal connection and interpretation of Patsy’s music. That is what I love about music. Boundaries are erased, and we all are welcome. Mixed in with the songs, were stories and humor. Jennifer Hopper playing the ‘Tra-Tra-Tra Triangle, with the Re-Cliners. 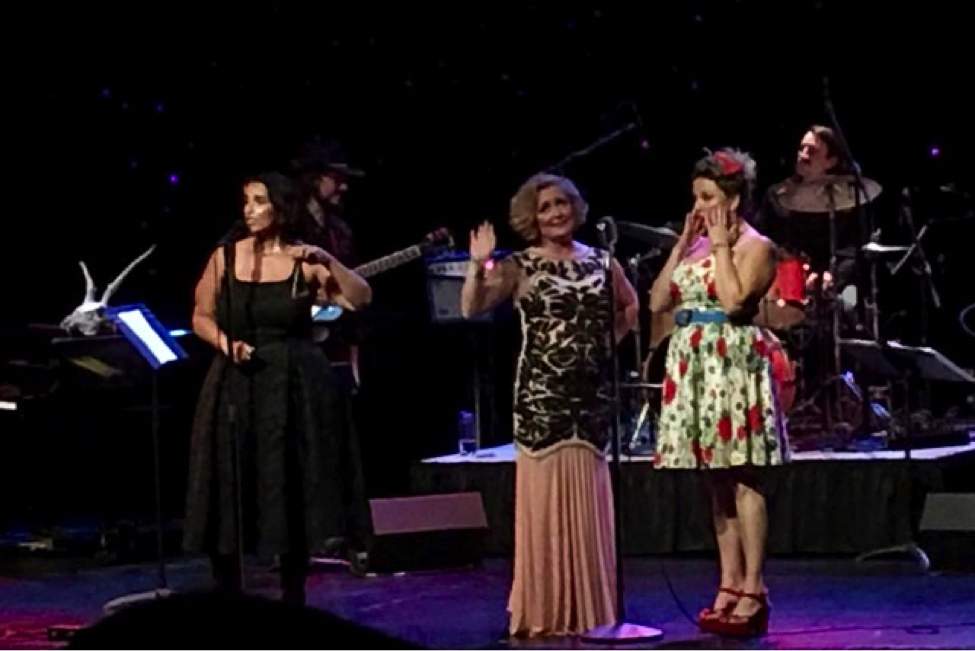 ​Kate Voss with her Melodica, which is basically a harmonica/keyboard combination. This was also the first time that I heard Star Anna perform, and was blown away by her intensity and strength.

I loved all the different costumes, too. V. Contreras wore an authentic, white vintage 60’s dress. And with her long, dark hair teased up, it was like watching Loretta Lynn sing onstage.  And Mackenzie Mercer wore the traditional cowgirl fringe beautifully as she performed.

And of course, my dear friend Jessica Lynne. I always love to hear her voice away from her band and her original songs. My ear is accustomed to hearing her sing from her albums. When I heard her sing Patsy Cline’s songs, I listened differently. Especially since she was not playing the guitar. It was just her voice, filling up The Triple Door Theater. And, she looked so beautiful onstage. One of those “I’m proud to be her friend moments.” I got a little choked up, when she said a special Thank You to Susan Renville and I from the stage. That meant a lot to me. 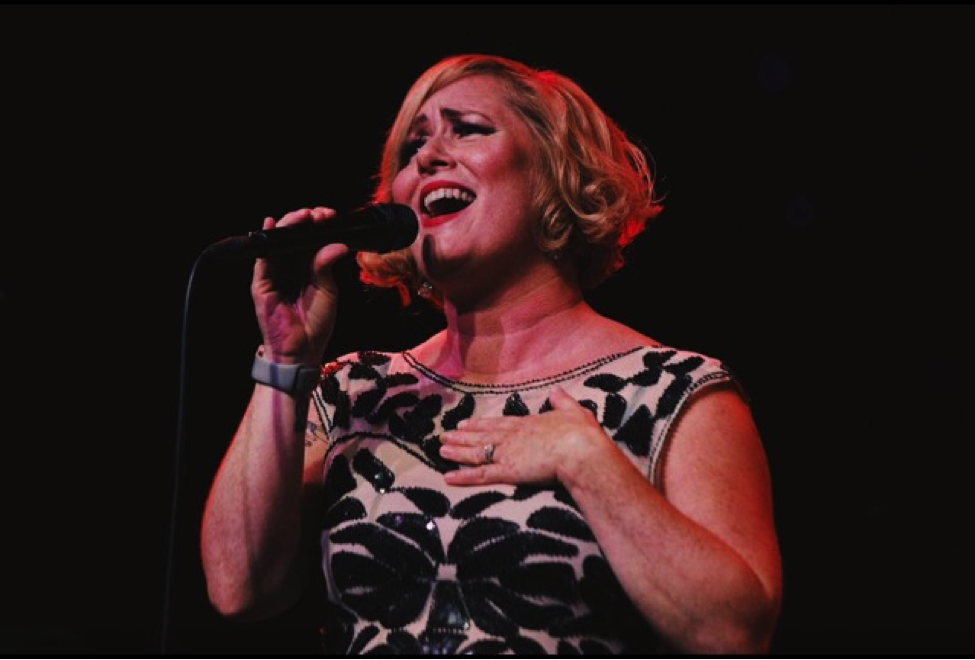 The band was fantastic. The sound was fantastic. And the ladies blew off the roof of The Triple Door with their voices. I’m so glad I have all their names, so I will recognize them for future performances in the Seattle area. And, I will return next year, for the 10th Annual Sweet Dreams Music of Patsy Cline Show!

After the show, the ladies came to the back and talked to the fans. I love that individualized touch, and of course, to get photos! Plus, get a close look at their dresses. So much fun! 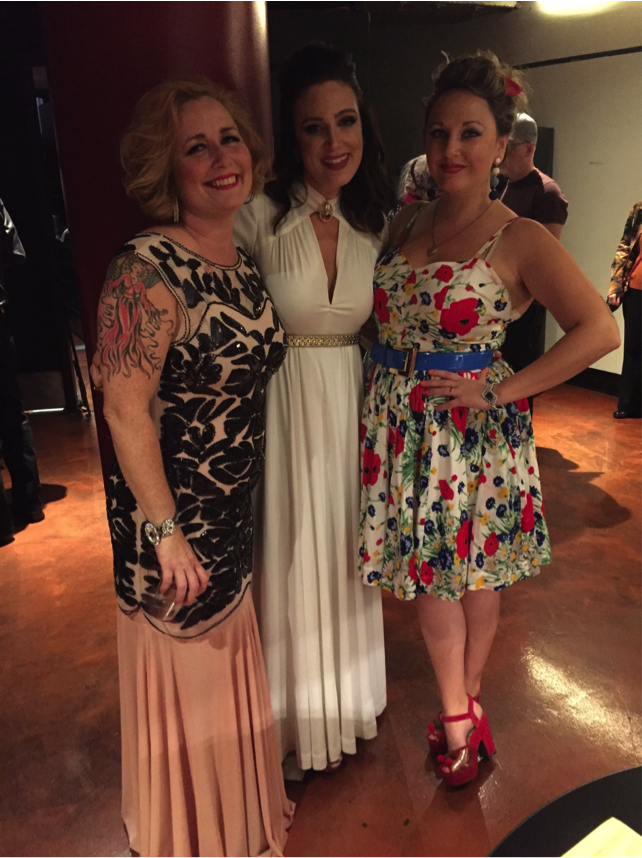 And now it’s time for Sherry and me to get busy looking for our Cowgirl Fringe to next year’s show. Because, you KNOW we’re going to wear it! 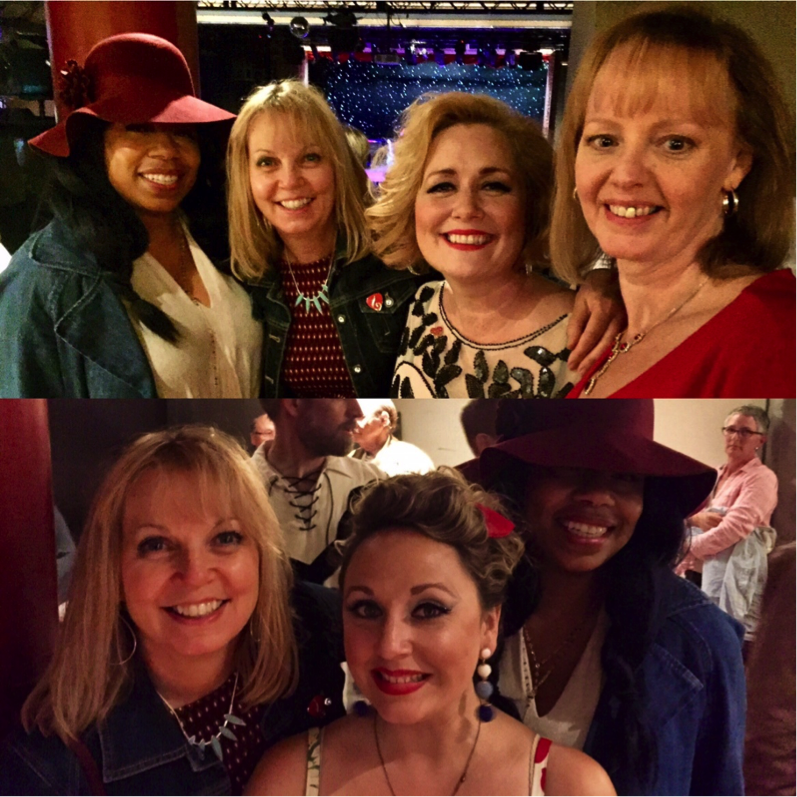