by Susan Varnes-Newland
(Guest blogger from Grieve The Astronaut)

As I sit in my red, vinyl bean bag chair, put my headsets on, plug the cord into my turntable…

1976-1978
I’m ROCKIN’ out, so the headsets are off and the volume cranked up!
I’ve always had very diverse musical tastes. I grew up playing classical music on the piano, and my Grandfather handmade violins. I sang in Jazz Choir in high school. And when you look at my vinyl collection from my teenage years, I have everything from John Denver to KISS! I’m always open to listen and learn. If there are human beings playing instruments, I’m willing to check it out. One genre of music that I have no experience with, is heavy black Metal.

April 2017
After 30 years of being a flight attendant, I’ve met a lot of people. That’s what makes this job so interesting. I was working a flight from Seattle to Amsterdam, when I noticed two men settling into the exit row seats in front of my jumpseat. My musician radar went up, so I asked them if they were in a band. They were Dagon and Incubus of the black metal band, Inquisition. Based out of Seattle and heading out on their European tour. Of course, I had to talk to them. And once I told them I was on a local musician’s team and understood a bit about their lifestyle, we enjoyed wonderful conversations. I was curious about their background and story. When I pulled them up on google, and saw their performance photos, I was WHOA!! That’s a little scary looking! So, I was intrigued. Here are two very polite gentlemen, who transform into dark, occult type figures while performing. What is their story. 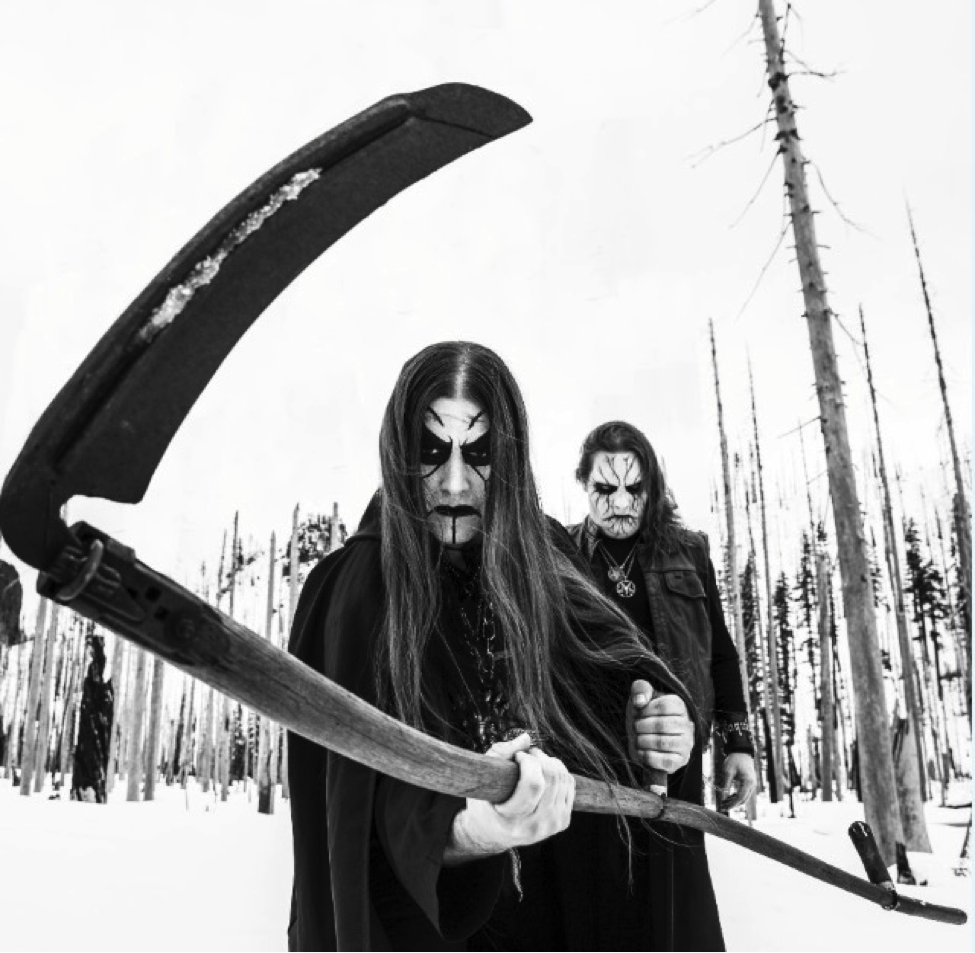 I have never been to a Black Metal concert. I see the occult images and imagine scenes from a horror movie, and just a lot of loud noise! So, it was great to talk to Dagon and Incubus and hear what their story was, before I heard their music. And I just want to clarify right now, these are just observations from our conversations during a 10-hour flight. This was not an official interview that I recorded or wrote down. These are just my memories. For official facts, you can google up Inquisition the band, and read previous interviews.

I was surprised to find out that it was just the two of them. A guitarist/lead vocalist and a drummer. That is so unusual for any kind of heavy metal or rock band. However, they’ve been together since 1996. So, I guess it works. No third or fourth party to add any artistic drama.This was not their first tour in Europe. They are popular there, and draw huge crowds. Especially at festivals. I brought up how different touring as a musician is, compared to my job as a flight attendant. I work the transportation aspect, and then enjoy the destination. They rest and relax during the transportation part, and then work at the destination. No time to tour the cities. Setup, perform, tear down, sleep, next destination. A lot of scenery is viewed out a window.  I found out that touring South America is completely different, as you can only travel by airplane between cities. Which adds even more fatigue factor, since they need to get up earlier to allow security, check-in and are controlled by the airlines schedules.During my crew rest break, I had an opportunity to connect to wi-fi and look up their YouTube videos. I watched ones from Hellfest 2016 in Clisson, France. A Megadeth Concert, with Black Sabbath and Slayer as headliners. Normally, I would have watched a couple of minutes and walked away. But because I knew who the performers were, I was fascinated! I could not believe the sound and power coming from just two band members. If you close your eyes, you would think it was an entire band. This was not just noise. These were two accomplished musicians performing their craft. I had to set aside my prejudice of what my view of a black metal concert was, and just listen to their performance. Incubus is a total badass on the drums. That’s a huge drum kit to set up, tear down and transport. And Dagon shreds the guitar, while singing with the most perfect, guttural voice for a black metal concert. I asked him later, if he used a special mike to change his voice, and he said no. That was just his voice. Crazy! And in this video, they’re performing to a packed crowd that were totally into their music.

Later, I had to ask. What exactly is the message you’re trying to share? Dagon said, it’s not a message, it’s a concept. A metaphysical and cosmic concept. Good and bad, dark and light. And after looking at the song titles from their latest album (Bloodshed Across the Empyrean Altar Beyond The Celestial Zenith) I can see that a story is being told. Dagon showed me a book he was reading that was related to their philosophy. By the end of the flight, my viewpoint of their music had totally changed. If I had seen their performance without talking to them, I would have viewed their music as ‘scary’, and loud noise. I wouldn’t have given them a chance. Now, I realize that they are talented and intelligent musicians. And very successful at their class of music.

Oh,and did they hold up the reputation as being wild, drunk and rude heavy metal band members? Causing a raucous on the airplane.
Nope. They acted like respectful and professional musicians, whose careers were still rising after 25+ years. 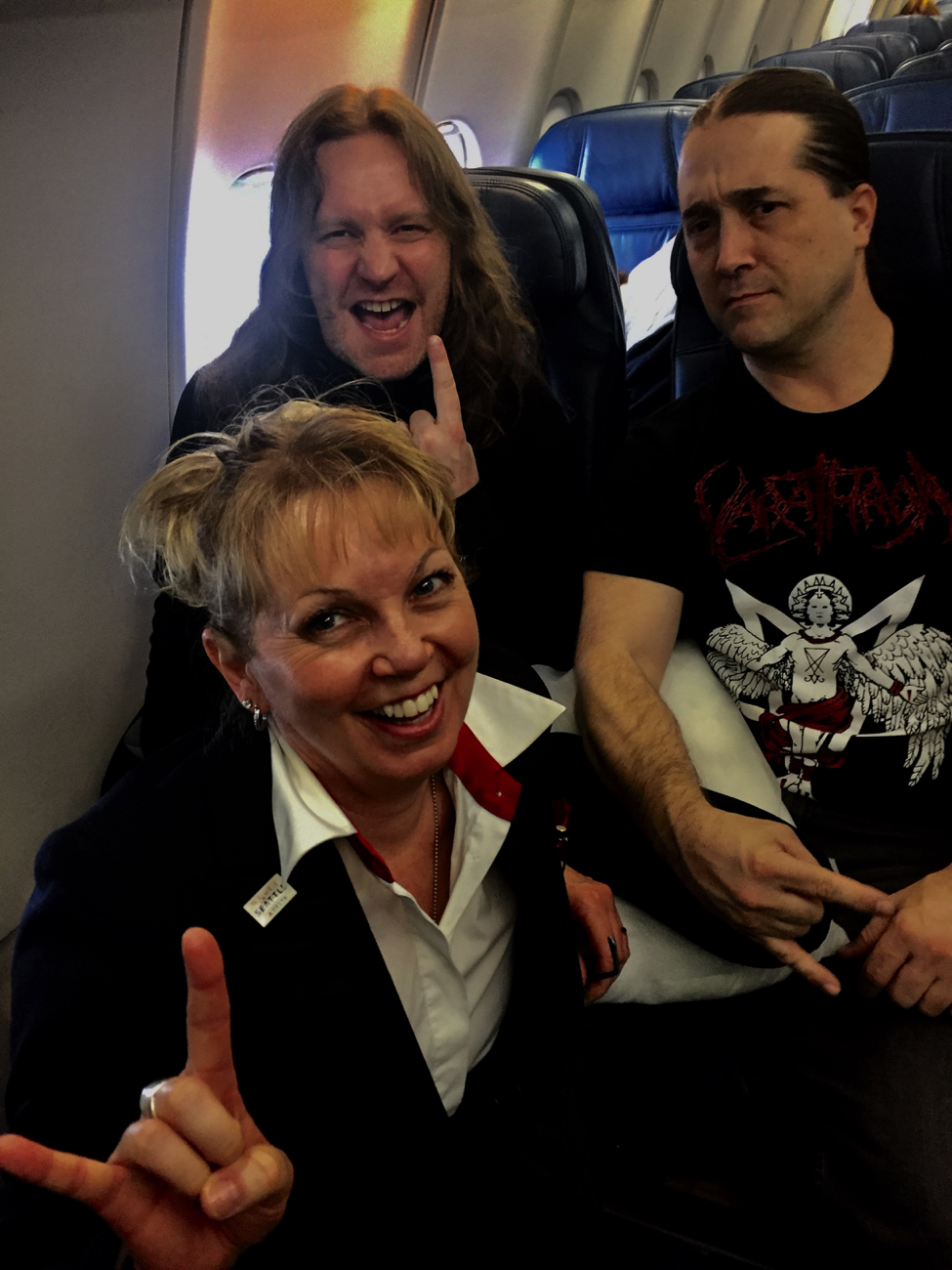 ​Meeting Dagon and Incubus of the Black Metal Band Inquisition

​Now, the middle age women heading out on a European Girls Trip? They were another story. They pretty much cleaned out the liquor drawer.

Make sure and check out Inquisition Official on Facebook, for their tour updates. Hopefully, I’ll get a chance to see them perform live this fall!